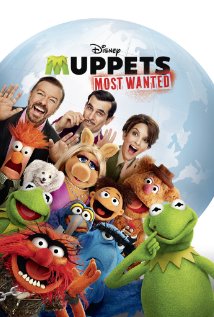 “Muppets Most Wanted” on IMDB

The Muppets have honed their formula to perfection in the 35 years since the original “The Muppet Movie” [my review]. There have been rough patches, but all was set right with 2011’s big-budget revival “The Muppets” [my review]. Where that film spent significant time on new characters and human relationships, this one is a return to the basics. More songs, more gags and more Muppets.

The formula is simple, but powerful, and it starts with surrounding the Muppets with a solid cast of humans. Here we get some of the best humans around: Ricky Gervais [IMDB], Tina Fey [IMDB] and Ty Burell [IMDB]. They all bring the kind of performances needed for a Muppet movie: a complete, shameless commitment to the insanity. Fey, especially, stood out, but all were impressive. Of course a Muppet movie wouldn’t be complete without a small herd of high-profile cameos, and there are many here. None, unfortunately, that really stood out or excited me, but they were there.

Secondly, you need to do all the things that makes any movie a success. Good writing, direction, pacing, staging – the works. You can’t rely on the audience’s love of the characters to overcome basic problems. The songs have to be catchy and fun and move the story along. The plot doesn’t necessarily have to be logical, or even make sense, but it does have to be consistent. The characters, also, have to be respected and treated consistently. Muppet movies are comfortable, fun and, in a broad sense, predictable and this is an undeniable part of their charm.

Finally, you can simply never take anything – especially yourself – too seriously. The number of inside-jokes, fourth-wall breaks, asides and call-outs is astounding. What’s even more astounding is the number of them that actually hit home. The characters are exactly, and hilariously, as stupid as they need to be to allow the most ridiculous plot devices. They are also exactly, and hilariously, as competent as they need to win out in the end.

The one conceit that’s never, ever violated is that the Muppets are real. They are not creations of felt and cloth; they’re actors playing roles and having a hell of a good time doing it. There’s a wink to the audience; a conspiratorial whisper that lets us all in on the gag. We know we’re watching a movie and the Muppets know they’re in a movie.

That’s the way the Muppets work. They don’t try to bring us into their reality and they don’t ask for our suspension of disbelief. Rather they calmly, deftly insert themselves into our reality. Our paradigm gleefully shifts to accommodate them: the universe plus Muppets. After all, what universe wouldn’t be happier with more Muppets?