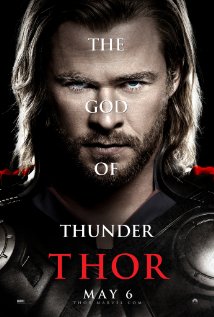 Good movie.  Took my son, he enjoyed it as well.

I never personally read Thor (or many Marvel comics, being a DC Universe kind of guy) so I had very little background to go on, but I believe they struck the right tone here.  For fans of the other Avenger movies (“The Hulk”, “Iron Man”, etc) there are plenty of inside-jokes and the ever-suffering Agent Coulson of S.H.I.E.L.D. is given his largest role yet.

Natalie Portman is great (as always) and there really wasn’t a poor performance (although Loki did push the boundaries).  I was disappointed that Rene Russo had such an uninspired role, but you can’t win them all I guess.

I think what struck me most about the film was the marked lack of scale.  I attribute this to the direction by Kenneth Branagh, who may seem an odd choice for a summer blockbuster but acquitted himself incredibly well.  All of the meaningful scenes had a closeness, an intimacy that belied the fantastic, god-like nature of the characters.  The humanity – both the admirable and lamentable aspects of it – of the characters, especially Thor himself, was always brought to fore.

Although there were scenes of Asgard and the Frost Giant homeworld of Jotunheim meant to establish enormous scope they were somewhat sterile and lifeless.  While there are a few bombastic action scenes (all exceedingly well done and just as juicy with CGI as anybody could hope) the movie set its standard in the small personal scenes.

There was clearly a struggle between giving both Thor and Loki a meaningful depth of character and providing the plot with the necessary character transformations.  In the end the changes were more abrupt and less natural than I might have liked but not so bad as to ruin the story.

The ending was also somewhat anti-climatic as it was mostly a personal battle with an ambiguously ethical, essentially alien driver.  Again, this really didn’t interfere with my enjoyment of the film but it may have held more power if the conflict ranged a bit closer to home.

Thor, like Superman, has a constant challenge of providing enough resistance to it’s god-like protagonist while keeping him relatable and grounded.  Thor does this as well as the best of the Superman movies and that’s about the highest praise I can offer it.