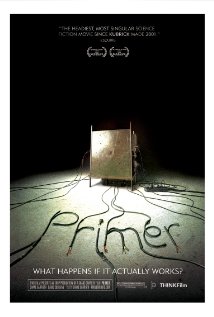 [This is the thirteenth review for this edition of  my semi-regular “my-wife-and-kids-are-visiting-relatives-so-I’m-watching-loads-of-crappy-movies” film festival.]

This is a deeply (deeply!) engrossing, multi-layered story that hooked me completely.  The movie’s been on my “have to watch someday” list for a long time but for some reason always slipped through the cracks – I’ve done myself a disservice.

While the kernel of the story is time-travel it’s the exacting and practical way that it unfolds that’s the true genius.

The movie is entirely carried by the two leads – one of which is also the writer, director and producer.  For both of them this is their first listed role and as such it may be more a testament to dumb luck than skill that both are absolutely, unquestionably excellent.  The dialog is dense, layered and technical.  Lines often blend purposefully together and overlap one another.  It only works because of an undeniable chemistry between the leads.

The entire first half of the movie is one of the best representations of the work of science I’ve ever seen.  The effort, the collaboration, the experimentation the confirmation: it’s all there.  The ups and downs,  the sweat, the eureka moments are all represented.  The discovery seems completely natural because the discipline required to obtain it is clearly shown.  You believe in what they’ve done because you see them doing it, not because the lab looks impressive or their computer has a lot of lights on it.

I warn you however: this movie requires an effort.  Effort to understand what’s going on; effort to understand the ramifications of the characters actions.  The story twists and folds in on itself masterfully.  It’s unfair, I think, to say “confusingly” and would rather say “precisely”: each scene builds precisely from the scenes before and makes every assumption that you’ve understood them.  I’m already considering re-watching a few scenes to clarify things.

This is unabashedly, unswervingly and unapologetically a “thinker”.  There are no action scenes, no special effects, no villains, no forced love story, no sex and (my favorite) no twist ending: none of the hollywood marketing hooks we’re all familiar with.  I can’t even remember a scene with raised voices.  It was completely riveting from start to finish.