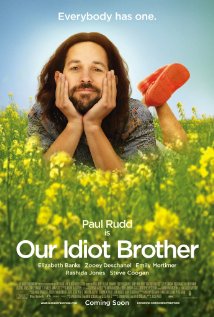 “Our Idiot Brother” on IMDB

This strikes me as the independent film equivalent of the summer popcorn blockbuster.  Take a movie like, say, “Pirates of the Caribbean.”  It can be dismissed creatively as committee-generated pulp while still earning millions upon millions of dollars and a rabid fan-base.  Here we have an independent movie that pushes all the right indie buttons – drama, humor and character – but simultaneously takes such a safe, predictable path that you’d swear it was pressed from a well-used mold.

The movie is a comedy with dramatic elements, but you’ll neither laugh or cry during it.  This sums up the issues I have with the film: it’s bland.  It’s plain-vanilla, Melba-toast, white rice bland.  There are emotional lows here that should make you cry, but they’re tempered with quirky music and subdued reactions that eliminate the sting.  There are emotional highs that could thrill you but they’re ultimately downplayed.  It’s as if the movie, like its protagonist, doesn’t want to bum anybody out.

The titular character can’t really be called an “idiot,” rather he’s played (well, but stereotypically) as a free-spirited hippie who expects the best of people in all circumstances.  He re-enters the lives of his three sisters after an absence and disrupts them in terrible , horrible ways that (of course) all work out for the best in the end.

The film paints him, perhaps ironically, as the only truly stable character.  While he’s a driving, elemental catalyst for change in his sister’s he floats through the movie almost completely unaffected.  This is a good movie but like “Pirates” it’s also an excessively safe movie that never really stretches itself for fear of alienating it’s audience.