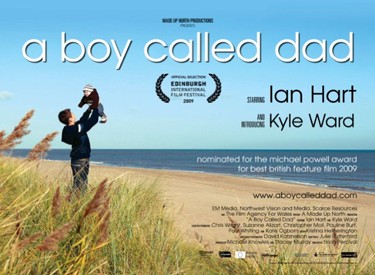 “A Boy Called Dad” on IMDB

(Before we begin, a warning: this film may be very hard on the ears of Americans.  The accents are thick, deep and steeped in slang.  Even if you’re a fan of British media, as I am, you may find things hard to follow.)

This is one of those movies that I find very difficult to review.  On one hand it’s a serious, well-acted look at an interesting real-world topic.  On the other hand some really, terribly stupid things happen in it.

The main story concerns a 14 year-old boy who has both recently connected with the father that left him when he was five and fathered a child of his own.  The second item is vastly more interesting but is presented almost as an afterthought for the first third of the movie.  Many of the expositionary scenes are assumed.

We never see the conversation where he’s told that she’s pregnant or that he’s a father.  We don’t see him struggle with this change in his reality.  We never really meet the mother.  The boy’s mother is also glossed over, getting a grand total of one line in the film.  During later scenes we flash back to them to see them reacting to events – crying or looking worried, but they’re given no other purpose or depth.  The father is given the greatest depth throughout and in many ways the movie revolves around him.

The bulk of the story follows the boy after he abducts his son. The reasons for this are ambiguous at best and spontaneous at worst.  By making the event seem like nothing more than an emotional outburst, like an accident, the boy’s commitment to his son doesn’t seem as powerful as it might otherwise.  We miss a huge chance to really connect with the pair here as the movie quickly takes a huge detour into the life of a troubled girl.  It’s almost as if the writer had several stories to tell and couldn’t bear not to include them all.  While they’re all interesting all of them at once tended to muddy things dreadfully.  Continuing the theme the main events of the (rather bizarre) ending happen off-screen.

The story, fractured as it was, was still interesting and often engaging.  The problems were in the pacing and progression not in the staging or interactions.  Performances from those that were allowed to give them were excellent all around and well worth the cost of admission.  It is a shame that the story wandered so much that we couldn’t see similar depth from some of the other glossed-over character however.  It’s hard not to wonder how this cast would have handled a more substantial, down-to-earth drama.

In the final analysis however this is a still a good movie – at least it’s better than the majority of the crap that gets squirted out of the studio system.  But while you’re watching a good drama that raises some important questions you’ll periodically be forced to think “what the fuck just happened?”