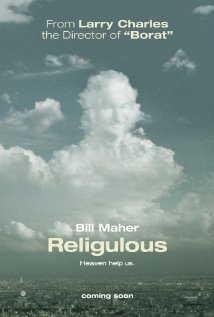 Bill Maher has never been one to shy away from controversy or confrontation.  Sometimes (as with his views on medicine and vaccines) he’s as crazy as you could ever ask somebody to be but in the matter of religion he and I see pretty much eye-to-eye.

When first released this movie was warmly received by critics and roundly attacked by the religious right.  Melany Ethridge, writing for Answers in Genesis, claims the film “is nothing short of an all-out attack on faith and a call for atheists to advance.”  (Exactly why Atheists “advancing” is a bad thing is never explained but I’m sure that she knows her audience.)

“Religulous” is absolutely, unabashedly biased (it may come as news to some that documentaries have no requirement to be fair).  At the same time it’s also really rather tame considering the squawking backlash.  While Mahar does challenge statements he hears (sometimes only in after-interview comments) there is far more interested listening than real debate.

The pacing of the film is a little uneven and while there’s a lot of content it deals (with very minor exceptions) exclusively with the Abrahamic religions.  Christianity dominates the first half covering Evangelicalism and Catholicism and others.  After a brief stint on Judaism and some smaller but well-known sects the second half is dominated by Islam.

The comedy – and this movie is damn funny – comes almost exclusively from the interviewees.  A fair criticism may be made that many of those interviewed should not be considered representative of their faiths but dammit, they are good for a laugh.  Just as many however are well-respected leaders of their various faiths.  Interspersed throughout are personal anecdotes from Mahar who grew up in a mixed (Jewish/Catholic) home.

This is a funny film but, like most documentaries, speaks best to those that already agree with the point-of-view being presented.  There is no attempt to answer profound questions or solve real problems and there doesn’t need to be.  The real problem for the faithful is that the laughter they may have at others “wacky” beliefs will inevitably turn sour when the same skewer is poked through their own.