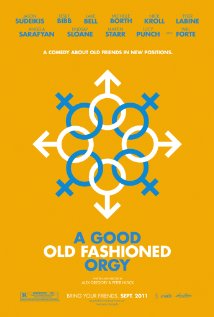 [This movie is the first in what unexpectedly became a Tyler Labine [IMDB] film festival when we coincidentally watched two movies starring him in a row.]

This falls squarely in the “likable, quirky group of friends explore an oddball premise” class of rude-comedies-with-a-heart category.  In this case eight friends are facing the loss of their shared summer home where they’re known for throwing elaborate parties.  To celebrate their last summer together (and to defend the movie’s title) they decide to have… well, you know.

The movie holds together better than you might expect.  There are some weak points where the raunch takes over and sadly drag things down but for the part the laughs are warm and friendly – but not especially big.  That said there’s not a whole lot new here and the gags tend towards the safer end of the spectrum.