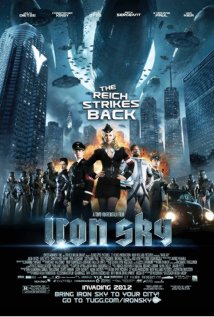 Nazis on the moon!  That’s pretty much the premise and, surprising nobody more than me, it actually (kinda) works.  Where the movie (a Finnish/German/Australian production in English and sub-titled German)  tries and fails hardest is its often ham-fisted political satire.  This movie has nothing nice to say about anybody (except maybe Finland, who still comes off as slightly pathetic) but the United States definitely gets the brunt of things.

In 2018 the president (a terribly transparent parody of Sarah Palin with a George Bush accent), in an attempt to drum up re-election support,  sends a manned mission to the moon.  The astronauts, including the first African-American to walk on the moon (thus the mission slogan “Black to the Moon!”), find that the Nazi’s had secretly set up a hidden city on the dark side of moon.  They’ve spent the last seven decades building an invasion force and, thinking that the new mission is the start of a counter invasion, decide to put their plans into motion.

Our black astronaut (who spends most of the movie in white-face as early on the Nazis “cure him” of his negro-ness) is the embodiment of a 1970’s stereotype (Scandinavians apparently don’t have the pulse of the black community).  Unfortunately this whole plotline is basically abandoned to the point where you wonder why it was even included.  The acting is good, overall, with veteran television actors filling most of the roles.

This movie has its opinions and it’s not afraid to share them often.  And loudly.  America, embodied in the president and her staff, is self-centered, ignorant and power-hungry.  After chastising the other members of the UN for breaking an arms treaty the president is accused of lying about the same issue.  “Oh, we always lie!” is her passionate, dismissive defense.  While nobody truly comes off well the United States is, reasonably or not, roughly tarred, feathered and raked very slowly over the coals.

The sometimes clever but often inane satire does drag the story down, but the final act redeems itself with some of the more interesting visual effects I’ve seen this year.  While not state-of-the-art the effects feature amazingly intricate steampunk-like exaggerations of 1940’s technology and are wonderfully realized and implemented.  So if you’re tempted to leave when the President intimates that she would have started an unnecessary war to ensure her re-election why not suck it up and wait for the Nazi Space Zeppelins?  They’re really pretty cool.