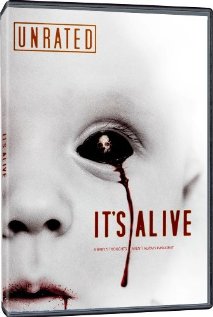 The original “It’s Alive” [1974, IMDB] is a camp-horror classic.  It was over-the-top, silly and just serious enough to keep it from completely disappearing into obscurity.  The idea is simple: a woman gives birth to a mutant baby that kills people.  This 2008 remake take the same premise and tries to make a straight, emotional horror movie.  It pretty much fails completely.

I believe the fundamental problem is that the movie just can’t decide what it wants to be.  It spends most of its time as a “descent into madness” film as we watch the mother of the creature compromise herself more and more to its care.  But that kind of thing only really works if the mother has no external support – and she does here.  It also wants to be a “monster in the corner” movie but the remote location, necessitating the need for people to come and visit (and die) gives this aspect a repetitive, clichéd quality.  There’s also half-assed attempts at the “insightful doctor” and “dedicated cop” stories but neither is done well or indeed works at all.

What becomes more and more clear as the movie progresses is that it only works if pretty much everybody, but most especially the father, is completely and totally retarded.  We see needle-like bite marks on the mother and later the needle-like teeth of the baby – but this goes completely unnoticed at the hospital and by dad at home.

The movie is just broken.  It brings a new dimension to the term “plodding”.  Had they taken the dad of the picture it might have worked as a psychological thriller focused on the mom.  Had they embraced the camp of the original it could have worked since we’d be more willing to accept the silliness.  Instead it just kind of slides around ultimately grinds slowly to a completely trite climax.  Do yourself a favor and track down the original instead.