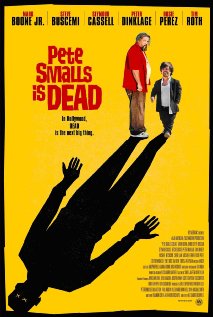 “Pete Smalls is Dead” on IMDB

In a good way this reminded me a lot of “The Big Lebowski” [IMDB].  Not in story but in sensibility and pacing.  It’s not as good – Lebowski is an acknowledged classic from master filmmakers after all – but fans of it should like this.  A subdued kind of depressiveness permeates the entire thing but is offset by moments of deep optimism and emotion.

Like “Lebowski”, whose adventure starts to replace a rug, K.C’s (Peter Dinklage, IMDB) is all about getting his beloved dog back from a loan-shark who has taken him to ensure repayment.  When an old (famous and rich) estranged friend from hollywood dies he’s convinced to come to the funeral based on the promise of enough money to pay his debts.  When it turns out his friend’s last film, only partially finished, is actually based on a script stolen from him K.C tries to leverage his position into a pay-day.

To be absolutely, profanely clear: Peter Dinklage is a fucking national treasure.  He’s often pigeon-holed due to his size but this is exactly the kind of role that we need to see given to him more often.  K.C. isn’t a “dwarf role” and could have been played by anybody but Dinklage brings a wonderful laconicness to the role that’s a joy to watch.  Unfortunately I can’t say the same thing for the rather overbearing narration that he delivers.  It was annoying, often patronizing and the entire film would have been substantially better without it.

Although flawed by the narration, some pacing issues and a really weird dream sequence (another touchpoint with Lebowski) this was really a joy.  It was silly and sentimental at times.  Bizarre, serious, romantic, depressive and manic at times.  And – spoiler! – unlike Lebowski K.C. actually does get his dog back in the end.