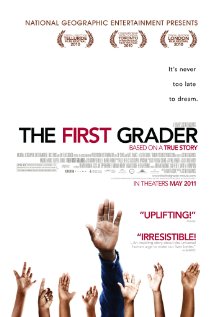 “The First Grader” on IMDB

I honestly know very little about the Kenyan revolution (or Kenya in general actually).  Like most “true stories” it’s very difficult to parse what’s being presented as actual truth.  Some things are just so terrible that you hope fervently that they just can’t be true.  The message of the movie concerns the unbreakable nature of the human spirit but the lesson that you’ll probably come away with, just as I did, is this:

They really do not come off well in this film.  We see (through flashbacks) our hero getting tortured in all sorts of ingenious and terrible ways and his wife and young children brutally murdered in cold blood as a punishment to him.  All the while there are smirking, pompous British people giving the orders.  This isn’t ancient history either.  This stuff is supposed to have happened in the 1950’s: you know, that time that Republican’s tell us that the world was perfect.

In any case after suffering more than any 10 child molesters should our 84 year-old hero, Maruge, decides to take his still fledgling government up on their offer of free education to all and enrolls in the local primary school as a first grader.  There’s a lot of drama, of course, stemming either from those that feel that he’s taking resources away from the children or those that still resent his part in the failed rebellion.  There are also just a few outright assholes.  But this is a feel-good movie so everything works out pretty well in the end.

I’ve been flippant, but this truly a good, engrossing film.  The flashback scenes are tastefully done, but still gut-wrenching so those of delicate constitutions be warned.  Overall it’s a little too preachy and a little too manipulative to be truly great but the (for me, at least) unfamiliar (and beautifully shot) setting and history kept my attention easily.  Performances were excellent and hit exactly the right notes to support the shameless manipulation of the story.  You’re definitely going to love Maruge by the end… and know with a burning certainty that British people are not to be trusted.