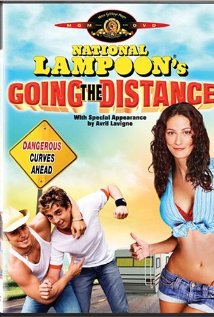 “Going the Distance” on IMDB

Oh, “National Lampoon”, why have you let yourself go so much?  There was a time when seeing your name over a film title ensured a high-quality low-brow experience.  Granted those times where 1978 and 1983, but still, my point stands.

This isn’t a terrible movie – it’s just so completely by-the-numbers that it’s difficult to actually place any value on it.  It’s the movie equivalent of camouflage.  It blends into the background well enough that if you don’t look hard it looks just like a movie.  If you start to stare, however, it becomes more and more clear that something just isn’t right and that it’s really a special ops soldier ready to disembowel you with a bayonet.

I guess I’m not very good with metaphors, but some of that had a point.  I think.

This is actually a pretty fun movie for recent sci-fi fans.  Being a Canadian production means that the movie is littered with people who have appeared in the various “Stargate” series, “Battlestar Galactica”, “Warehouse 13” and many others.  It’s a fun game to try to place them.

This all may be a little too harsh.  It really is a fine little movie.  It’s easy.  You know what’s going to happen, everybody is likable and while it does fall squarely in the “romp” category it tends, for the most part, to the tamer end of the spectrum.  It was nice seeing Joanne Kelly [IMDB] letting her hair down as well although (and I’m only moderately ashamed to admit it) I was ever so slightly disappointed that she had no nude scenes.