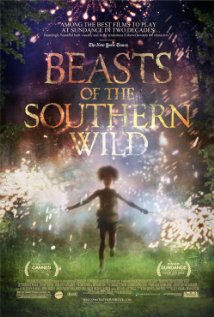 “Beasts of the Southern Wilds” on IMDB

This is an odd little movie.  A wonderful, thought-provoking, completely odd little movie.  In broad strokes, it’s an environmental film but this aspect is almost an afterthought.  The setting – the origin of which is only really mentioned in passing – is a place called “The Bathtub”.  It’s the only remnant of Louisiana left dry and outside an enormous levy built to protect the Southern U.S. from rising sea-levels.  The small population of the Bathtub live in squalor struggling to maintain their sense of community fearful that they will be forcibly taken from their homes to government shelters.

Six-year old Hushpuppy (Quvenzhané Wallis [IMDB]) is our guide and narrator throughout.  The majority of the film deals with her relationship with her temperamental father, Wink (Dwight Henry [IMDB]). It’s often unclear whether some of the things we see are real or simply embodiments of Hushpuppy’s imagination.  This is especially true of the Aurochs, giant horned pigs released by the melting ice and who, we’re told, are traveling to eat up Hushpuppy and all her friends.

There’s a lot at play here – all the more so because the film refuses to spoon-feed the audience its message.  There’s clearly an overreaching message about global warming.  There’s also definite intimations concerning Katrina and the government handling of that disaster.  There’s also a rather confused celebration/condemnation of the joys and sorrows of poverty.  The Aurochs, especially, are maddening.  They clearly represent Hushpuppy’s overwhelming fears (and her eventual ability to face them) but, for being so central, are given very little attention or depth.  As a metaphor, they’re somewhat successful, but I can’t help but think that the movie’s message would have been much more meaningful without them.

The movie is beautifully directed and the cast (nearly all of them novices) is very effective.  It’s an achievement worth even more praise when you learn that the film was produced on the thinnest of shoestring budgets.  It’s not perfect: the last act meanders more than a little and falls victim to more than one cliché.  These are minor criticisms however.  The movie is novel, interesting and, if our house was any indication, should lead to some good conversation.