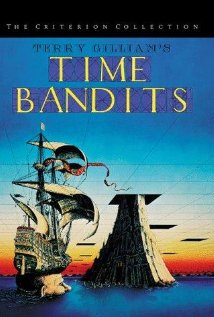 [My daughter recently discovered that all her Jewish friends go the movies on Christmas day.  She come up with the idea of watching eight movies for  Hanukkah.  Because great old movies are kind of like… an oily miracle?  Or something?  Anyway – this is number two.]

I am sad to say that both kids abandoned us during this.  Apparently this complete and total classic was “boring”.  I fear for the future, but I also have to begrudgingly agree just a wee little bit.  This was one of Terry Gilliam’s [IMDB] earliest movies after decades of “Monty Python”.  It suffers, like most of the Python movies, from a skit mentality.  While there is a (brilliant) over-reaching plot the movie is made up of a string of nearly independent vignettes.  There’s completely different  pacing for each which gives the movie, especially to new viewers, an unsettling quality.

It’s a shame that the movie doesn’t translate as well as it might.  It’s an undeniable classic.  Few directors can do more with a little than Gilliam.  The practical effects have a timelessness – like a charcoal sketch – that works just as well now as they did 30 years ago.  Sure, the overuse of the synth in the score stamps it “80’s” but the additional songs by George Harrison still work perfectly.  For better or worse the rampant consumerism and absentee parenting portrayed by Kevin’s family is still an issue.  Even us atheists can easily get behind Ralph Richardson’s [IMDB] Supreme Being against David Warner’s [IMDB] Evil.

Terry Gilliam has made a career of smart escapism.  This may be one of his first attempts but it’s also one of the best.  Even if dumb kids are too dumb to know it.