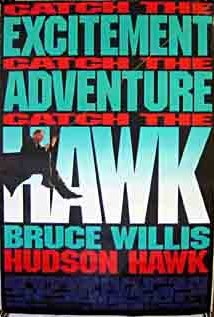 [My daughter recently discovered that all her Jewish friends go the movies on Christmas day.  She came up with the idea of watching a movie for  each night of Hanukkah.  This is number five!]

“A movie this unspeakably awful can make an audience a little crazy. You want to throw things, yell at the actors, beg them to stop” – Peter Travers, Rolling Stone.

“In Hudson Hawk, that arrogance is out of the closet. The qualities that describe most legendary turkeys — the mixture of spectacle and tin dialogue, the idiot plot that just keeps marching on, the actors who plug away with incongruous enthusiasm long after the film has died — are all here, yet in a peculiarly self-conscious, show-offy way.” – Owen Gleiberman , Entertainment Weekly

Well, Internet, that’s interesting commentary coming from something powered almost entirely by pictures of cute kittens.  I’m not sure why you think you have any right to pick so fiercely on what’s clearly a silly, just-for-fun farce.  It’s not perfect, but damn – it’s not that bad.  What do you know anyway?  You made a star out of Justin Beiber for Christ-sake!

You know what, Internet – fuck you.