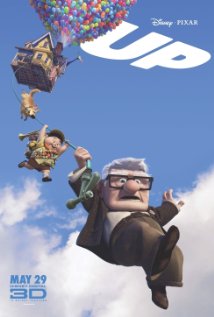 [My daughter recently discovered that all her Jewish friends go the movies on Christmas day.  She came up with the idea of watching a movie for  each night of Hanukkah.  This is the eighth and final one!]

We tried this “eight movies for Hanukka” thing on whim – and will likely not be continuing it as a tradition as, honestly, it did feel like work sometimes.  We also ended the entire exercise with the same (very likely completely broken) understanding of Hanukkah as we started with (which may actually be fully appropriate for a family of atheists).

Although we admittedly have only the vaguest religious notion of Hanukkah we are sure that it serves at least one important purpose: bringing families together in happiness; even if only for a short time.  It makes you aware of the support and strength you have around you and, for that reason, I can think of no better movie to celebrate it than the Pixar masterpiece “Up!”

A lot of focus as been placed on the age of the protagonist in the movie.  Mr. Fredrickson is 78 – see, old people can be full of life!  I think to a large extent that view is missing the point.  While a surface reading may be “you’re never to old to have an adventure” I feel the more powerful message is “you’re never to old to find family.”

The movie introduces us to Carl and Ellie, childhood friends who face many of the same mundane, but important challenges of life as we all do.  They age, fall in love, marry and live their lives.  Unable to have children they craft a fulfilling, intimate, almost private, universe for themselves that becomes a very lonely place for Carl after Ellie’s untimely passing.  Those first 20 minutes are as close to film perfection as we’re likely to see in our lifetimes.

The rest of the movie is driven by Carl’s promises to his late wife but the deeper story deals with him unexpectedly discovering and – almost against his will – nurturing a new family.  One that he’s surprised to find ends up meaning just as much to him.  As he slowly sheds the superficial affectations of his old life (there may never be a more apt metaphor than a jumble of balloons slowly running out of gas) he discovers the true depth of his feelings both old and new.

That’s the true magic in “Up!”  You’re not just seeing an old man perform action movie heroics; you’re seeing a man who’s heart was full to overflowing then shattered to dust find it in himself to love again just as fiercely as he did before.