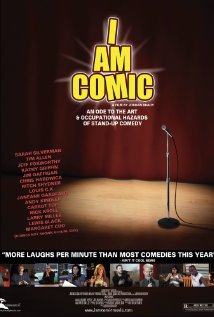 “I Am Comic” on IMDB

I’m a big fan of stand-up comedy (although I’m a big hater of clubs – I neither drink nor smoke – so I almost never go out to see it).  It’s truly one of the purest forms of performance.  Most comics author and perform their own material in front of small, often distracted (and drunken) audiences.  They might travel for months on end to stand on tiny stages under blinding lights and do dozens of shows in a week.

If they’re very (very) lucky they can make just enough to keep doing it.  It really is one of the most difficult, masochistic careers that anybody could possibly choose.  Novices often get paid nothing (in exchange for the exposure) while even veterans working up to headliner status still need to work almost nonstop to nudge themselves over the poverty line.  The number of headliners that can actually make a comfortable living is so small as to be well within the margin of error statistically.

We start off with a quick lesson about stand-up and a run down of the jargon involved.  Through interview clips with dozens of comics, both well-known and unknown, we get background on the club scene and how it works.  Open-mic nights lead to small paid sets and, if you’re very lucky, maybe eventually to better time-slots and even headlining.  There’s also an interesting back and forth concerning those that hit the road and commit to as many smaller clubs as they can versus those that stay local in large cities where they can do sets at several clubs in a single night.

The main thread of the documentary follows Ritch Shydner [IMDB] a rising star of comedy in the late 80’s.  After successful guest spots on Letterman, The Tonight Show and many others, he stopped performing in the early nineties and moved into producing and other ventures.  The interviews that make up the bulk of the material are punctuated by his attempts to stick his toe back into those shark-waters.

This is a funny movie but not because performing comedy is at all a focus.  It’s a funny movie because these are funny people.  Funny people that, it becomes clear, are completely addicted to making other people laugh.  If you love comedy as much as I do then you’ll not want to miss this.