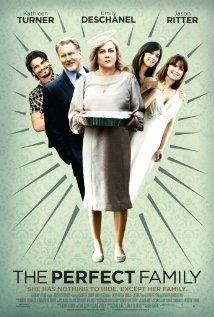 “The Perfect Family” on IMDB

This was a nice little movie.  Kathleen Turner [IMDB] plays Eileen Cleary, a fanatically devout catholic woman.  She’s active in the church and community and by all impressions as model a catholic as anybody could want.  Of course, if it all ended there this wouldn’t be much of a movie.

Eileen, you see, is up for a prestigious award, “Catholic Woman of the Year”.  The church would like to interview her and her family, review her life and catalog her contributions.  It’s a pretty simple movie so her long-time rival is both up  for the same award and a total bitch.  Should she win, she’ll granted “complete absolution” by the diocese.

(I must admit that I, as a former catholic and now atheist, honestly don’t really understand this “special absolution”.  I was still under the impression that confession handled all of that.  But why don’t we just go with it?)

Most of the movie revolves around Eileen struggling with her personal reasons for wanting this award (and the absolution it grants) and the reality of her family whom she loves dearly but represents a laundry list of anti-Catholic memes.  Her daughter, after yet another “why can’t you find a nice boy and settle down” speech, comes out as a lesbian.  More damming, a lesbian who is pregnant with an inseminated baby and planning to marry her long-time girlfriend.  Her son, pressed into a loveless marriage after getting his high-school girlfriend pregnant, is leaving his wife and children for his mistress.  Her husband, a recovering alcoholic and former adulterer, is feeling ignored and has moved out.

So, in the end, will Eileen continue to value the precepts of the church she’s dedicated her life to or will she come to embrace her family despite their flaws?  Like that’s even really a question?

Kathleen Turner turns in a fine performance but the movie is too ham-fisted for my taste; rather clumsily passive-aggressive.  It’s downright friendly in its criticism of the church and takes pains to show many of the positive, most local, things it does.  This is far from the anti-Catholic polemic that some have labeled it (I likely would have enjoyed that more).  If anything it’s rather tame and bland overall.  Good as far as it goes, but it just doesn’t go that far.