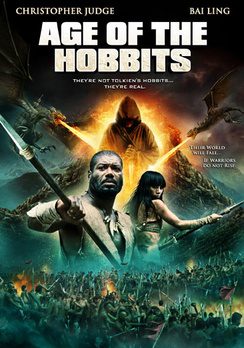 “Age of the Hobbit” (aka “Clash of the Empires”) on IMDB

[After I released this review I learned that this was also released under the title “Lord of the Elves” and this is how you’ll find it – if you really insist on doing so – on Amazon.com Instant Video.]

On a scale of “one” to “what-the-steaming-shit?!” this ranks a solid “Whaa?”  Apparently the title “Age of the Hobbits” pissed off somebody and so they officially changed it to “Clash of the Empires” (for, I presume, the many re-pressings this will need once word of mouth gets out).  Like other quality films, this has two people that you may have heard of and then a whole lot of people pulled off the local street.

In this case Christopher Judge [IMDB] (who clearly must have cried himself to sleep every night) and Bai Ling [IMDB] (who, if rumors are true, is pretty pants-crapping-crazy anyway) both star.  Christopher Judge is actually what attracted me to this in the first place and seeing him in it made me terribly sad.  Even more depressing?  His only other film credit in 2012 was “The Dark Knight Rises” [IMDB] (where he played “Mercenary Security #4”).

(Maybe he, Charles S Dutton [IMDB] and Michael Dorn [IMDB] should get together and do a reality show about great black actors that keep getting the shit end of the Hollywood stick.)

12,000 years ago in Indonesia the evil, brutish (and most often dazed and confused) Rock People have attacked the peaceful midget Tree People.  They kidnapped many of them to eat on the full moon (which is mentioned several times as a waxing moon is shown).  So some of the Tree People (they’re never called “Hobbits”) ask the Giants for help.  Judge plays the main “Giant” and he is, indeed, a good eight inches taller than everybody else.  For her part Ling plays another “giant” even tho’ she’s kinda short even when hanging around the little people.

It is 12,000 years ago, so of course the Rock People also have flying dragons and giant lizards.  Because, why not?  The CGI used for these is low-budget TV-quality at best, but the practical effects are almost non-existent and terrible.  There’s a lot of quick camera cuts and stabbing at things off-screen that fill in for story and action.  Close-up of a foot, close-up of a surprised face; still shot of somebody lying on the ground covered in ketchup blood.  Shot of Judge with a spear; shot of dinosaur; shot of Judge stabbing off-screen; shot of dinosaur falling; shot of Judge pulling his bloody spear back from off-screen.  That kind of thing.

Despite the fact that they seem to be speaking English, all the dialog (with the exception of Judge and Ling) is dubbed.  Badly.  Since the “actors” can neither act nor speak English, their delivery is halting and sporadic.  So when people that really speak English try to loop it (and for some reason try to lip sync) it makes things repeatedly, wonderfully hilarious.  I swear there’s a scene with this kid hiding in the bushes where you’d swear she was orgasming during her lines.

This is a truly terrible movie and it made everybody involved sad.  Those of us not directly involved in the production, however, have a lot to laugh at so I suppose their pain was worth it.