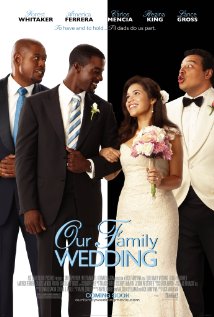 “Our Family Wedding” on IMDB

Stand back and let me pitch this to you: two young people meet at college, fall in love and get engaged.  She drops out of school to follow her dream, he plans on taking her to Laos as part of “Doctors without Borders”.  They haven’t told their parents any of it!

You with me?  Now, get ready to have your mind blown: he’s black and she’s latino!  Their fathers are bigots!  They hate each other!

Comedy gold, right?!  Well, not really “gold”.  More like bismuth or cobalt.  Some semi-precious ore that’s pretty common, kind of drab but is needed for some esoteric industrial process that most people never heard of.  Something useful but not really obvious like industrial desalination or waste sterilization.

Something that works perfectly well, but isn’t particularly cutting edge or even interesting except to a small group of dedicated aficionados.  Something that probably made a few people a good chunk of money but that nobody ever dreamt about when they were kids.  In short something that’s perfectly fine, even something a measure of pride could be taken in but something that most people couldn’t care less about.