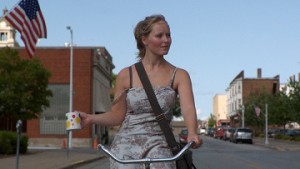 The basic idea here was very good.  Alexa (Cat Smit [IMDB]) is a pretty Dutch girl whose gay friend has killed himself.  To discover why, she travels to his small hometown in Iowa and interviews people about their experiences being gay in middle-America.

The movie is clearly a labor of love and is technically very well done.  The cinematography is simple but elegant.  The acting is above average for the budget.  The intentions are clearly good, if confused, but the issues eventually overtake and overshadow the rest of the film.

The first rather glaring issue is that her friend, supposedly the reason for this entire odyssey, is a complete non-entity.  We literally never meet the character.  There’s no backstory, no history and no anecdotes.  No flashbacks showing us what a great guy he was.  No tearful interviews with family or friends.  There is absolutely no reason given, at all, for why we should care about this man or mourn his passing.

This might have actually worked if Alexa, as a character, impressed us.  If she was so utterly engaging and personable we might then naturally assume that anybody close with her must have been somebody of quality.  Instead Alexa is almost completely devoid of personality.  She barely speaks in the film and when she does it’s often monosyballic.  Her acting mostly consists of blank stares and her character is, purposefully or not, often a complete douchebag to those around her.

More fundamentally, the movie splits itself into two uneven pieces.  We’re treated to short interstitial clips from the documentary that Alexa is presumably making.  These are all talking head clips of people relating their experiences with being gay and coming out.  While they are powerful, they are unfortunately too short for any connection to be made.

The rest of the movie, in theory following Alexa actually making the documentary, feels completely disconnected.  It wasn’t even clear to me that she was making a film (I must have blinked when this was covered).  She never carries a camera, never seems to be meeting people or arranging interviews.  She never, ever, seems invested in this project that has taken her halfway around the world.

Finally the movie, idiosyncratically, introduces a subplot of lesbian sexual awakening as Alexa becomes involved with a local artist but must choose whether or not to pursue it.  All of the men presented, and outside of the nameless interviewees there are actually only two, are purposefully terrible.  One is a soulless, juvenile womanizer and the other is creepy, near-psychopathic hoarder.  Framed as a choice between these odious options and the interesting, intelligent lesbian it completely drains the subplot of any real tension or complexity.

I may admittedly be missing the point here but it seems to me that the character attempts to play at, then chooses to be, a lesbian.  Despite some feeble attempts there’s no true exploration of the difficulties of being gay in America.  There’s no real insight into the confusion and emotional turmoil of self-identifying as gay.  The implication is that she’s attempting to find an emotional connection to her dead friend but in doing so trivializes the very thing the movie sets out to celebrate.

For this reason, more than any other, I had the most trouble taking the movie seriously.  Despite all good intentions it seemed to lose its focus almost immediately.  It fails almost completely as a look into being gay in America and as a tribute.  While it’s somewhat more successful as a love story, it’s too simple and too manipulative to be truly compelling.