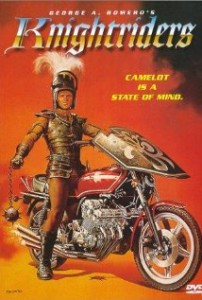 I had admittedly totally forgotten about this movie until I was reminded by a hilarious Cracked.com article, “5 Insane Moments from the Manliest Movie Ever Made“.  Once reminded I felt obliged to track it down and relive the majesty.

The movie is something of a love story to the more noble, but arguably unrealistic, ideals of 70’s counter-culture.  Our protagonists are trying to return to a feudal existence, wandering the land performing for the locals, sharing resources, supporting the extended group as a family and jousting on motorcycles.

Yes, the group has knights, squires, a king (played by a sometimes naked Ed Harris [IMDB]), a queen and a magic black man named Merlin (played by famed storyteller Brother Blue [Wikipedia] whom I remember fondly from my time in Boston).  They joust using makeshift armor on motorcycles and battle with medieval melee weapons in wide-ranging sidecar battles.  This is done both as paid entertainment for the locals and as a way to determine status and leadership in their latter-day Camelot.

In short, the movie is impossible to describe without it sounding like either silly escapism or ridiculous idealism.  You expect to see either an over-the-top ballad to two-wheeled violence or a patchouli-soaked hippie chanting circle.  The odd thing is that you get both.  The odder thing is that somehow, it works.

It’s not perfect.  There are lot of ideas competing for your attention: corporate greed and ignorant consumerism, the true meaning of freedom, loyalty and many others.  At over 30 years-old you’ll also (really) feel its age more than some other movies I can think of.  All that accepted, this is still a movie that works surprisingly well.  It’s just so damnably sincere that you can’t help but get pulled in.