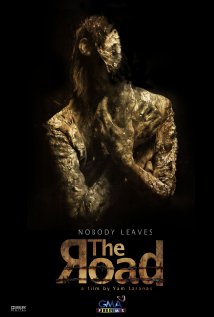 “The Road” on IMDB

[This is the ninth selection in my irregular, “My Wife and Kids are Visiting Relatives and I’m Home Watching Movies” film festival.]

I had no preconceptions going in to this.  Finding out that it was a foreign film gave me pause; horror being a genre that has a lot of trouble crossing cultural gaps.  After a nicely evocative credit sequence the opening scenes shifted gears so completely that I began to suspect “crap”.  I’m glad I stuck it out: this movie ended up so much better than I expected to be.

First off a warning: this movie is subtitled.  Being a Pilipino film the entire thing is in Tagalog which a) looks to be about half English anyway and b) is a hilarious name for a language.  Anyway this is sub-titled, but its an easy read.  There isn’t a huge amount of dialog to begin with and what there is tends to be brief.

The story is told in three parts covering 30 years of history; each part explaining much of the previous.  An interesting mixture of ghost story and “man-as-monster” tale builds slowly – perhaps too slowly for twitch-addicted American audiences.  Tension and inference are used excellently throughout and the script refuses to let you rest on comfortable assumptions.

This is an old-fashioned ghost story.  It benefits and suffers from all that entails.  Modern audiences may find it slow and they may not be pleased with the rather subdued ending.  Older audiences will likely appreciate the effort and patience that went into the production and the classically simple imagery.  I fall squarely into the latter camp.