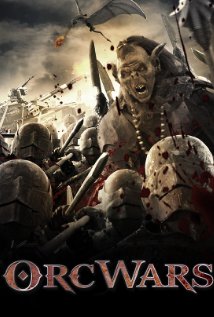 This was from a lot of the same people that brought you the weirdly fun “Orcs” [Our Review].  Apparently they got a good deal on the equipment because they’re back again with even more orcs.

In this cross-over fantasy a magical portal connects a land of elves, orcs and dragons with our own.  The elf princess has been chased through by a horde of orcs driven on by an evil witch.  The portal, somehow, provides itself with a heavily armed guardian on our side who, as you might guess, has to be convinced that he’s a guardian.

The movie throws a lot of material at the wall to see what sticks.  There’s a blind indian, an elvish princess, a dim-witted redneck, a troubled Iraqi war vet, an orc with depth and a bunch of other tropes.  Had it slimmed down the sub-plots, it may have been a smoother ride.

The movie does have some gumption and it deserves some credit for that, if nothing else.  Unlike “Orcs” there’s no camp or silly references.  It takes itself very seriously and tries harder than most.  It’s failures are obvious but expected.  The weak (often very weak) acting can’t sell the suspension of disbelief.  Staging, continuity and effects problems are plentiful and there’s little action choreography beyond lines of orcs standing still and being shot with the exact same nonsensical blood-spatter effect.

Still and all, the movie has an odd kind of weird charm.  Not enough to really elevate it but more than enough to keep you from despising it.  It’s broken – horribly, horribly broken – but never malicious.  Unlike the piles of schlock that simply cash in on more popular movies this is more clearly a labor of love.  It’s just too bad that love and skill didn’t seem to be available in equal measure.