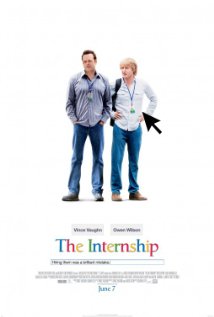 “The Internship” on IMDB

This is a completely clichéd “Old dogs teach new tricks” story.  Vince Vaughn [IMDB] and Owen Wilson [IMDB] are luxury watch salesmen made irrelevant in the age of smart phones.  Deciding they need a change in their lives they apply, in a flash of optimistic hubris, to a cutthroat technical internship program catering almost exclusively to new college graduates.

The internship is at GOOGLE!

That’s it.  That’s the gag.  That’s the entirety of what carries this movie.  These guys don’t know how to work their phones, they hate computers (to the extent that they had to do their video interview at the public library) but they want to work at the Google!  Surprising nobody more than me, this actually carried the movie pretty damn far.

The actual plot is crusty-crackly-old.  Moldy old.  The guys get matched up with the group of young, unsure-but-brilliant misfits.  They first fail to understand simple technology but later teach their young companions about life via strip clubs and alcohol.  The kids, each in plodding turn, learn something important about themselves that gives them confidence and allows them to overcome challenges as a group.  There is also, of course, a rival, mean team that damn well gets theirs!

Tossing Google into the mix made this watchable but not great. Since this was actually Google nobody could be really evil.  You can show somebody evil trying to get into Google – that’s fine – but to show evil people actually working at Google would just invalidate the process your celebrating (and probably wouldn’t be allowed).  There are a lot of fun little cameos and callouts to Google culture and practices that actually hit more often than they miss.  Alternately there are also a healthy share of ridiculous technical references that will make technical people cringe.

If this had been set at some fictional tech company it would likely have been a pretty solid turd.  Adding Google to the mix definitely brought it up to “average” but not much further.  Fans of Vaughn and Wilson will likely find it too tame while fans of Google may find it too raunchy.  It’s solid, but not inspired; funny, but not hilarious.