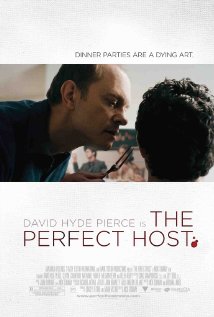 “The Perfect Host” on IMDB

Taking a break from gorging on the summer blockbusters we missed, we gave this little indie darling a try. The decision was based solely on David Hyde Pierce’s [IMDB] participation – his very first starring role, no less. We had no preconceptions and little idea what to expect.

The movie begins with an injured thief, John (Clayne Crawford [IMDB]), looking for someplace to lie low.  The purpose of these scenes is to make the audience comfortable with John’s character.  He’s a hardened criminal, but not a brutal or unfeeling one.  He’s willing to do what needs to be done, as he sees it, but happily accepts the path of least resistance.  Bleeding and desperate he knocks on a random door and cons his way in.

Warwick Wilson (Hyde Pierce) is busily preparing for a dinner party but, ever the gracious host, invites this needy stranger in and provides what comfort he can.  In contrast to rapid-fire insight given to John’s character, we’re given little to define Warwick.  He is a polished mirror of civility and decorum that tells us nothing.  It’s not until circumstances intensify that the true depth of that particular rabbit hole is plumbed.

I won’t be telling you about that.  This is one of those delicate, fragile movies where revealing almost anything forces you to reveal almost everything.  Suffice to say that things are not what they appear and leave it at that.  Hyde Pierce’s performance is remarkable and displays surprising range.  Crawford’s role doesn’t afford him the variation that Hyde Pierce enjoys but he works well with what he has.  The supporting cast of mostly unknowns all put in worthwhile efforts.

This is definitely a film that exists for the middle.  The core idea is clever, entrancing and perfectly executed.  Pacing, staging, tone – everything worked.  The beginning is interesting, but nothing special.  The ending reaches for more than it can grasp and results in several gaping, completely avoidable plot holes.  But, oh damn, is that middle good.