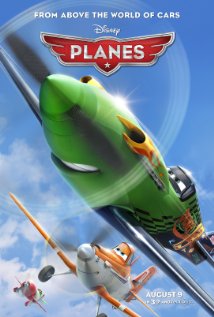 It used to be that companies like “Pixar” had to suffer poor imitators. Other companies would come along and produce, at best, paint-by-numbers knock-offs that hit all the same notes but couldn’t hope to match the music. For every “A Bug’s Life” [IMDB] there was an “Antz” [IMDB] and for every “Finding Nemo” [IMDB] there was “A Shark’s Tale” [IMDB]. These big-budget semi-clones where never terrible but they were always missing something.

Luckily, due to the big-business merger of Pixar and Disney they can now get the same exact treatment from themselves! The best thing about this is that they get to keep all the money!

Pixar’s “Cars” [2006, IMDB] was a great movie. Not being a fan of racing, I may not have been able to appreciate it as deeply as some, but it brought the goods. 2011’s sequel, “Cars 2” [IMDB]… wasn’t a great movie. It was still good – all Pixar’s movies are good – but it felt forced. More a contractual obligation than a labor of love. With “Planes” Pixar seems told parent company Disney, “just do whatever the hell you want.” So Disney sat down, thought long and hard, considered its legacy of quality and innovation and finally got bored and said, “Fuck it, let’s do cars again – but with trains!” Then somebody else said that sounded like “Thomas the Tank Engine”, so they changed it to planes.

The movie’s not complete crap, mind you. Disney did do its homework. It gathered the requisite cast of interesting voice talent and it stereotyped all the correct foreign cultures. It has good guys and bad guys and it knows which of them need to win in the end. All of this was fine, some of it even good. Everything else was crap. “Cars” worked because it was, in truth, a heartfelt homage to auto-racing. “Cars 2” failed because it wasn’t, but survived on the strength of the characters. “Planes” just flat-out pretends that global prop-plane-racing is a thing and that we’ll care about it. It’s not, and we don’t.

The movie is towering pile of cliché and predictability. Our hero is a plane that’s afraid of heights! There’s an old plane that teaches him obvious “secrets” that no other professional racing plane seems to know! The bad guy… cheats! He’s also elitist!  And he treats his friends poorly! The good guy has a wacky group of friends! They come through for him! It also has the line, “I learned a lot more from you than you ever learned from me.” It’s trite and its boring. Watch “Cars” again, instead.