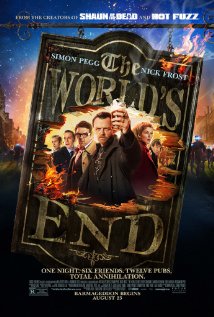 Andy has decided that his only true regret is that he was unable to finish an epic pub crawl he, Andy and three other friends attempted 20 years earlier. 12 pubs and 12 pints in one night, ending at the famous “The World’s End”. He convinces his reluctant crew to head back to the try again. Once started the group discovers that there’s something different about their old home town.

I don’t want to spoil the reveal (which has likely already been spoiled, but not by me). Suffice to say there are a lot of special effect shots in the last acts. The effects are all excellently done and perfectly suited to the tone. Tongue in cheek without being campy or crude. The script is layered and encourages multiple viewings. You may note, for example, how the names of the pubs visited are all related to the current state of the story.

The movie isn’t as strong as Wright’s previous efforts, “Hot Fuzz” [IMDB] and the nearly perfect “Shaun of the Dead” [IMDB], but is still a blast. The chemistry between Pegg and Frost is as energetic and believable as ever and the rest of the cast is littered with welcomed familiar faces. The ending leaves something to be desired but it is consistent. Wright may surprise with his endings but he thankfully refrains from twisting them too badly.

This is a no-brainer for fans of the previous films. It has the same trademarked brand of uncompromising, desperately human humor that has made the previous films so beloved. Here’s hoping that Wright, Pegg and Frost decide to buck boring definitions and continue adding to the trilogy.