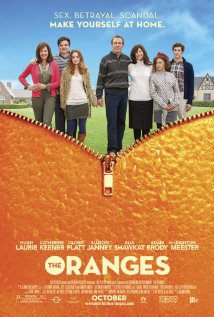 “The Oranges” on IMDB

The Walling and Ostroff families have lived across their suburban street from one another for years. Dads David and Terry (Hugh Laurie [IMDB] and Oliver Platt [IMDB]) are best friends and moms Paige and Cathy (Catherine Keener [IMDB] and Allison Janney [IMDB]) raised their daughters together. Everybody has settled into comfortable,  if not particularly happy, ruts.

Vanessa Walling (Alia Shawkat [IMDB]) is living at home after suffering setbacks starting her career. She’s convinced herself that she’s simply “preparing” for independence but is actually hiding from the world. Wild child Nina Ostroff (Leighton Meester [IMDB]) hasn’t been home in years. When her ill-advised engagement collapses she heads home for Thanksgiving to regroup.

When Nina and David begin an affair all hell breaks gleefully loose as the two families carefully manicured lives come tumbling down.

The script is crisp but neutered. Safe and light, it tends to avoid truly deep, lasting emotion in favor of more slapstick, cartoonish expressions. Every single member of the cast is a talented, likable veteran. The movie definitely benefits from their skill but doesn’t test it. There is also a noticeable lack of chemistry between the cast that detracts from many of the more serious scenes.

The movie seems to want to discuss the big things in life. Happiness and the consequences of it, acceptance and forgiveness and the various complications of being a grown-up. While it touches on these, and others, it finds itself unable to make a strong statement about any of it. Instead it vacillates weakly between the obvious answers never committing to any.

The movie is still fun and very watchable. The cast is amazing and you’re likely already a fan of several of them. It may try a little too hard at the end, but at least it doesn’t fall into total cliché. It’s not going to enlighten or change your life but it will distract you for a while.