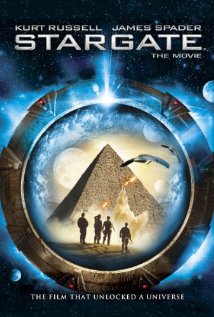 Wanting to celebrate Pi Day with a movie gets a little difficult after the obvious options are ruled out. “Pi” [IMDB] isn’t exactly a family movie. “Life of Pi” [My Review] is great, but we had re-watched it recently on a whim. “American Pie” [IMDB] was floated as a possibility but dismissed as inappropriate for the audience. The excellent and often overlooked “Waitress” [IMDB], about a waitress who expresses herself through gourmet pies, was suggested as well; this was shot down by a small, but vocal minority who didn’t want any “chick flicks”.

So, after a considerable expansion of our parameters, we finally decided that a movie about a circle would be good enough. A big magic circle that sends you to other planets. Pi is the ratio of the circumference of a StarGate to its diameter, after all.

This was Roland Emmerich’s [IMDB] first obscenely-budgeted blockbuster. While he would later become uncomfortably fond with the idea of destroying civilization, this represents the man at the top of his form. The movie was lavishly produced and reminiscent of the grand epics of the golden age of film. It’s held up remarkably well over the past two decades.

The effects, both practical and digital remain impressive and, in many ways, subtle – especially for a man who would destroy every global landmark in “Independence Day” [IMDB] two years later. The movie was also genuinely emotional and lacked the clichéd jingoism that would dominate his later work. It’s likely to be his most influential movie as well, having spawned three popular television series two additional direct-to-video films.