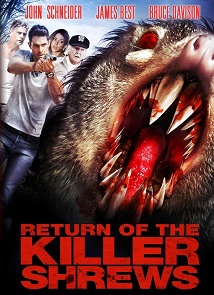 “Return of the Killer Shrews” on IMDB

1959’s “The Killer Shrews” [IMDB] would have likely been totally forgotten if not for the classic 1992 “Mystery Science Theater 3000” episode. Over 50 years after the movie was released, and 20 years after MST3K made it momentarily relevant, these folks decided to make a sequel. They really shouldn’t have.

The sequel drags 86 year-old James Best [IMDB], star of the original, out of semi-retirement. He’s probably best known for his role as Sheriff Rosco. P. Coltrane on “The Dukes of Hazzard” [IMDB]. To round this out they also convinced one of the actual Duke boys, John Schnieder [IMDB], to slum it and dredged up the guy who played Cletus (Rick Hurst [IMDB]). This was all, apparently, for one extended gag that sank like a stone on delivery.

The movie tried to be a nice little call back for fans of schlock but just couldn’t pull it off. The first big problem is that while the original laughably threw terrible “costumes” over dogs to create their giant, killer shrews this one cheaps out and uses the same, shitty, cookie-cutter CGI as every other dumbass SyFy movie. Recreating the practical effects from the original would have been vastly more interesting. It also would have likely looked worlds better.

Secondly the movie is just plain and inexcusably lazy. From the completely spent “movie-within-a-movie” set-up to the ridiculous editing there’s just no craft, or attempt at it. You see that poster up there? The “shrews” in the movie look nothing like that. Nothing at all. And as bad as they look, they move even worse. Most of the dialog was clearly shot in isolation with canned reaction shots providing completely inappropriate responses to events.

Being a sequel the movie randomly attempts to create ties with the original but these are poorly explained and often forgotten. The entire exercise was good for a forced laugh or two but was mostly just painful and sad. If you want to watch an honestly terribly movie, stick with the original.