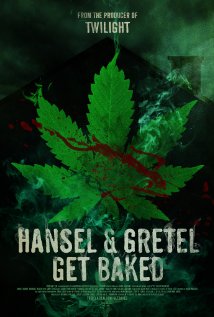 “Hansel and Gretel Get Baked” on IMDB

The best thing this movie could think of for a tag on its poster is: “From the Producer of Twilight”. Sadly enough, that may very well be the best thing about it. I’ve never seen “Twilight” and have now idea who produced it, but still, it may be. I’ll be honest, I only watched because it starred Molly C Quinn [IMDB] whom I adore in “Castle” and who has done a great job of building up geek cred with various comic/sci-fi related projects and appearances lately.

The basic premise is decent enough: a modern-day witch lures teens to her house with killer weed rather than candy. Stoners with the munchies being lured with candy might have made a little more thematic sense, but this works. The witch, of course, eats the children, but, in an added twist, also sucks out their souls to regain her youth. She’s also a nazi, I think, and she lives over a gigantic abandoned bomb shelter/grow house.

The witch is played by Lara Flynn Boyle [IMDB] and it… just doesn’t work. We first see her heavily made up to look old and haggard. The makeup isn’t good and she’s clearly not invested in the role, so she never looks “old”. After she consumes her first soul the makeup is removed to show her “young and beautiful” but, let’s face it, she can’t really pull that off anymore. She’s in her 40’s, has been ridden hard by life and ravaged herself with plastic surgery: she never looks “young”. At best she’s a woman squarely in the middle of the extremes that are required.

I, admittedly, may not be the best one to judge never having partaken myself, but stoner jokes made up most of the humor and most of them fell flat. It just pulled out the same tired, old stereotypes that we’ve seen for the past 50 years. Stoners like cookies… a lot! Stoners forget things… a lot! Additionally a wholly unneeded subplot about a violent drug dealer undermined the portrayal of pot culture as lighthearted and harmless.

The movie pulled of the horror aspects significantly better but still only enough to drag it from a “C” to a “B”. What there was worked well enough, but it’s nothing you’ve not seen dozens of times before. Most of the effects were practical, which always helps, but there were a few terrible digital effects just to remind the audience of the budget.

Slimming down and simplifying the story would have helped tremendously. Dropping the magic, the dealers, the zombies and the nazi bullshit could have left a nice, clean story about a little old lady luring teen stoners to her house and eating them. Instead we ended up with a weak, muddled, uninspired mess of a movie.