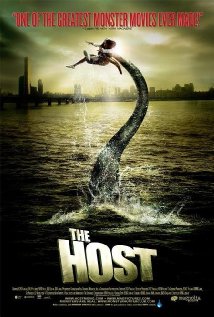 I’m not sure where this movie has been hiding for 10 years, but it should have come out and waved a long time ago! Classically themed monster movies are something of a rarity; especially in the United States. Luckily, as is often the case, the foreign market – in this case South Korea – is often ready to step in and pick the slack when Hollywood decides that moony-eyed-teen-love-triangles is the only thing that will sell.

The movie is subtitled. Those that are discouraged by this are going to miss out on some of the best genre films available, but I know it’s a sticking point for some. It’s telling, however, that the opening scene features an American Caucasian (speaking English) lambasting and bullying his poor Korean assistant into dumping surplus, expired chemicals down the drain instead of disposing of them legally. Americans, damn them!

The drain, apparently, runs into the Han river. A few year later a giant, bus-sized frog-lizard-fish abomination leaps out of the water and terrorizes a popular water-front park. As it leaves it snatches up the precocious daughter of the local screw-up who (badly) manages his fathers snack truck.

The creature is blamed for a deadly viral outbreak and the family is collected by the government and forcibly quarantined. When they discover that the girl is alive, but being held in the creatures larder, they’re forced to break out in an attempt to rescue her. Hunting down the creature while being hunted by the government is hard enough on competent people; does this messed up group of misfits even have a chance?

The story has a strong anti-government, pro-environment message. Specifically, American’s don’t come off well (for more reasons than those already covered). The stricken family is likable and broken, but determined and loyal: perfect underdogs and easy to root for. Much of the movie focuses on their issues and triumphs. Like many classic monster movies, very little is said about the origin or ecology of the creature. Chemicals in a drain equals one creepy creature that eats people. Period.

The effects are generally gorgeous with a few, minor, missteps when things start to get close up and cozy. The creature is wonderfully disturbing with much of its design based on devastating birth defects and mutations. Failed fins and feet adorn its limbs and hide like macabre jewelry. In action, it’s galumphing, slithering movement is mesmerizing. It’s face is a suitably disgusting mass of flaps, folds, tentacle-tongues and teeth.

The climax of the movie heads into serious overkill territory, but for all its ridiculousness is well choreographed and emotionally solid. The script throws a few surprises at the audience; especially if you’re spoiled by overly-simplistic American storytelling. This is a must-see for open-minded fans of classic monster-stomper movies.