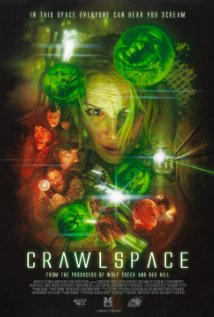 Stop me if you heard this one before: a bunch of scientists in a secret underground base are creating monsters. Something goes very wrong (or very right, I suppose) and the monsters get out. The base goes dark. The government sends in a crack squad of soldiers to clean up the mess and kill anybody left breathing. When they get there it’s more than they bargained for and everything goes pear-shaped. One of the experimental subjects turns out to be the former lover of one of the commandos. He ignores his orders to kill her on sight. The head scientist doesn’t want to see his greatest achievement killed and he tries to sabotage the mission…

…I’m sorry, you were trying to stop me for a while now, weren’t you?

So the movie isn’t original. It smooshes together bits from classic sci-fi, staples them together, spackles across the cracks and slaps on a coat of a paint. For the most part, it works pretty well. The story is paper-thin, but paradoxically more complicated than it really needs to be. Its also internally consistent, which is more than can be said for most offerings in this range. There is a “twist”, in the loosest sense of the word, but it’s rather subtle and integrates into the story without asking the audience to accept a radical change of course.

My biggest complaint, common to the theme, is that the “Elite Team” seems downright fragile. A lot of time is spent screaming through emotional breakdowns. This doesn’t ruin the movie; it certainly didn’t ruin “Aliens” [IMDB] or “Resident Evil” [IMDB] to have team members who were, to varying degrees, not ready for their missions. Still, there’s nothing saying that you can’t have actual, competent bad-asses and still get the result you want. Maybe they should have watched “Predator” [IMDB] a few times?

Technically the movie fires on all cylinders. The locations are claustrophobic and appropriately lit. The special effects suffer from the budget, but are clearly competent with a few moments of brilliance. The acting is more than good enough to carry the weak story and better than nearly anything the SyFy channel has wasted your time with. In short, it’s a solid, if uninspired, mad-scientist romp that kept my interest.