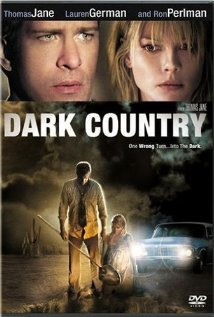 Thomas Jane [IMDB] stars in and directs this dark, psychological thriller. Dick (Jane) and Gina (Lauren German [IMDB]) met, fell in love and got married all in the same day. But that’s the kind of thing that happens in Las Vegas. They’re driving Gina’s old Ford through the desert at night – it’s the only way to beat the heat – so that they can start their new life together. Things go from bad to worse when they run down an accident victim and have to deal with a quickly unraveling set of circumstances.

Similar in tone and style to the excellent “Sin City” [IMDB], but not so similar as to feel derivative, the movie clearly leverages the visual language of comic books. Staging is striking and bold with high-contrast, highly-focused shots reminiscent of comic framing and presentation. Camera angles vary wildly, but often feel intentionally voyeuristic. Much of the movie is spent in the car, so the opportunity for innovative camera work is limited, but significant thought and care makes the few exterior sequences memorable.

There are many subtle effects used to either recall the film noir of the late 30’s and 40’s, such as intentionally poor mattes and overly-exaggerated actions in some of the driving scenes. Contrast and color-saturation are manipulated to some extent in nearly every scene to direct focus or set the tone of the prevailing emotional state.  Not all the experiments are successful, but many are absolutely gorgeous.

The story could be pulled straight from a pulp suspense novel or classic anthology series like “The Twilight Zone” or “Alfred Hitchcock Presents”. It explores the darker emotions of lust, rage, fear and jealousy. The isolation of the couple plays a significant part in maintaining the suspense. The only other significant role is given to one of my favorite actors, Ron Perlman [IMDB], and accounts for all of 10 minutes of screen time. While the script makes some questionable decisions, Jane and German both give excellent performances that were perfectly tailored to the material.

The tension builds in a smoldering slow-burn until it snaps and climax clatters past in a frenzied rush.  I refuse the spoil it, but the ending was… a train wreck. Unfortunately, it felt like there were two stories competing for the ending and the wrong one won. I will only say that it needed to be a different couple, and leave it at that. But really, it needed to be.

As a directorial debut, “Dark Country” is definitely something to be proud of. There are problems and some obvious self-indulgence to be seen, but there’s also definite cleverness and care. Choosing a story with so few moving parts likely helped, but knowing and respecting your limits is a huge part of being successful. I was disappointed in the ending, but enjoyed the hell out of everything else. Fans of thrillers should absolutely give this under-appreciated gem a try.