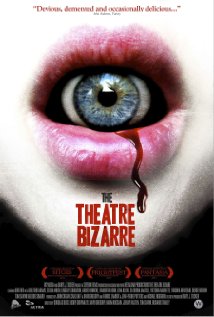 “The Theater Bizarre” on IMDB

Anthologies are difficult. Almost by definition they’re a hit or miss affair with a vengeful bell-curve describing the quality of each segment. If you’re lucky, you’ll get one really effective piece. If you’re unlucky you’ll spiral into disappointment as you build up hope during each transition that this one will be the really effective piece. Low-budget anthologies tend to suffer a host of other issues as well.

Happily, there are few gems in this collection of six shorts from six directors. Here are a few thoughts on each.

“Theatre Guignol” is the framing story. A girl stumbles into a seemingly abandoned theater to find it populated by a strange troupe that introduce each segment. It’s odd and weak, but also short and forgettable.

“Mother of Toads” is a strange choice to start with. A couple traveling in Europe run afoul of a witch with pronounced amphibian tendencies. It’s slow, uneven and tries a bit too hard to recollect classic horror films. It’s the most pedestrian offering by far.

“I Love You” feels out of place but is otherwise quite good. Essentially a dialog between an obsessive, possessive husband and the wife who’s trying to leave him it’s also entirely an effective, well-acted, but definitely not horrifying, emotional drama. It does get around to it, eventually, though.

“Wet Dreams” is the first offering here that tries to push the limits of horror and sets the stage for the increasingly higher quality offerings that round out the set. An abusive husband has persistent dreams of his wife relieving him of his manhood in various ways. Unfortunately it fails to truly vilify the husband which, in turn, makes the climatic reveal seem less justified and more like psychotic petulance.

“The Accident”, like “I Love You”, but even more so, doesn’t fit the tone of the collection. That said it’s a powerful, impeccably produced and profoundly moving examination of a child processing death. In context, it’s marred by the constant expectation that something is going to happen (it doesn’t). It’s an excellent piece of work that confuses you into thinking that you accidentally started a different movie.

“Vision Stains” is the most experimental piece and rides the conceit that a “biographer”, of sorts, has discovered that one can relive the highlights of a person’s life by stealing the liquid humor of their dying eyeball and injecting it into her own. Yes, this is graphically depicted. She obsessively begins to murder forgotten street women to preserve their stories. When she attempts to push her experiment to the next level the entire framework comes crashing down in an avalanche of pseudo-intellectual psycho-babble. It’s a great idea hamstrung by a weak ending.

“Sweets” is the final offering and perhaps the most disturbing and effective overall. A coy satire of the anything goes foodie sub-culture, the piece absolutely relishes in making gluttony as unappetizing as possible. Unlike “Vision Stains” which wasn’t quite able to rise to the quality of its premise, “Sweets” brings its nauseating message home in style. Featuring a unique visual palette this easily stands out and above the other offerings.

By offering the filmmakers such obvious freedom to follow their twisted inner muses “The Theater Bizarre” ended up with an uneven, multi-genre thematically vacant collection of surprisingly solid individual offerings. They even had the courtesy to present them in roughly “worst to best” order so that you wouldn’t leave frustrated.