“The Trip” on IMDB 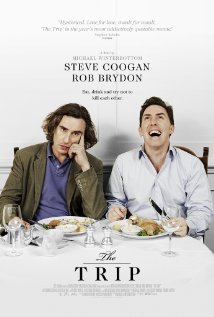 So, Steve Coogan [IMDB] and Rob Brydon [IMDB] wanted to do a movie. They wanted it to highlight their personal senses of humor, outlooks on life and love and maybe allow them to do some impressions. So, they tossed around some scripts, played with some genres, but nothing seemed to gel.

Finally, they just said “fuck it,” and decided to make a movie where they play themselves. The (incredibly thin) story is that Steve has been asked to tour and review fine restaurants across the country, and when his girlfriend bails he asks Rob to join him. While driving and eating, they have long, rambling conversations that, yes, include a lot of impressions.

Weirdly. it works. It’s just two very funny, very smart guys talking. Who knew that would carry carry a feature? The one caveat I have is that these guys, being British, talk about quite a bit that went right over this American’s head. I have to assume that more a few references are also getting pretty dated by now.

It’s a quiet little movie. If you’re looking for pew-pew, boom! and boobs, you’re not going to find them here, but you will laugh quite bit.