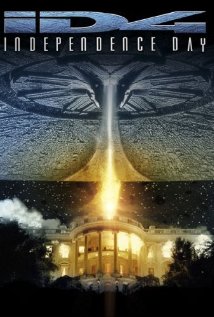 Why the hell not watch this today? You think it’s some kind of cliché? Something that displays a lack of imagination? Well, what the hell are you watching, if you’re so smart? Some kind of weird foreign movie with a smart script, interesting story and no explosions?

I guess that does sound pretty good, actually. Still, this is Independence Day! Monuments up in dust! Jeff Goldblum [IMDB] saving the world with a MacBook! Will Smith [IMDB] saying “Welcome to Earth” very clearly! Judd Hirsch [IMDB] as the Jewiest man ever!

The movie also has Randy Quaid [IMDB]! Now I’ve always been a fan of the Quaidster; he’s a decent actor and seems like a nice enough guy. I had absolutely no idea how important he was! IMDB’s bio (which, I shit you not, actually begins with the following) truly enlightened me:

Hollywood’s most extreme character star…. Randy Quaid has never been timelier. Randy, a man who took a bus to Hollywood with nothing but raw talent, is now a proven and current vast and varied star with that one other sustaining asset – he is a great and much admired actor on the world’s stage and television and feature film screens and an actor that has been recognized by Hollywood and the worlds finest directors.

What more could you ask for in a movie? You know, aside from originality, plot, three-dimensional characters and depth.