“In Bruges” on IMDB 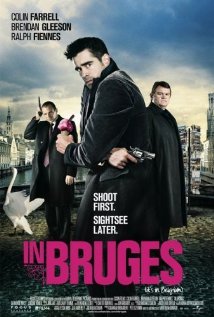 Ken (Brendan Gleeson [IMDB]) and his protegé Ray (Colin Farrell [IMDB]) are hit men. When Ray’s first job goes horribly pear-shaped, Harry (Ralph Fiennes [IMDB]), their viscious boss, sends them to Bruges, Belgium to get them out of the way for a while. The worldly Ken looks forward to some down time in a quiet town filled with classic art, medieval architecture and fine food. The immature Ray can’t stand the thought of it.

Gleeson (who is often under-appreciated), Farrell and Fiennes are all flawless. As needed, their performances reflect and complement each other, creating delicate balances. At other times, they amplify each other taking scenes to emotional crescendos. The performances position the audience perfectly in every case.

Interestingly, the three characters never interact as a group. Instead, the story juggles Harry’s clinical certainty with Ray’s confused introspection around Ken’s steady focal point. When Harry and Ray are finally forced to interact without Ken’s mediation, all hell breaks loose.

The script has some “broad stroke” problems. The main ideas are all cliché and it’s difficult not to dwell on the main characters as a metaphor for id, ego and superego. The more avant-garde aspects – and almost all the humor – result from Ray’s private forays into the city and his interactions with those he meets. Some of these feel contrived, but most work. In the details, especially in the interactions between the main characters, the script is tight, intimate and moving.

For all of the violence that stages events, and eventually erupts around the characters, this is a quiet, contemplative story. The few flaws are easily swept aside by a trio of insanely great performances.