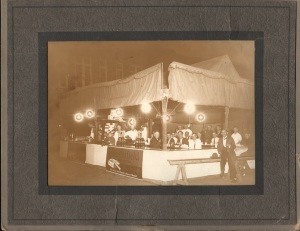 Yes, it’s true. I come from, as defined by Urban Dictionary, the “good, hardworking, trustworthy, honest, good-for-nothing, unreliable, foul-smelling vagrants” who man the traveling carnivals of the United States. My great-grandparents, Carolton and Ruth Mae Davis, operated a cook house and my grandfather would spend summers traveling with them.

You could get a meal, a Coca-cola and a pack of cigarettes, served with a smile, for about 50 cents. One of the more popular offerings was the Chicken Dumpling Soup. Here’s the “recipe” that’s been handed down, but never written down until today:

Boil chicken broth. Throw in some carrots or celery or both, or neither. Potatoes are good, corn is too. Onions? Sure, throw them in. Why not? Mix eggs and flour into a runny paste, then spoon drip into the broth to make the dumplings. Serve hot in big bowls. 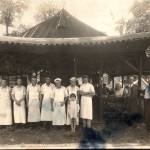 This picture was damaged by spilled ink decades ago. No idea who’s in it, or where it was taken. 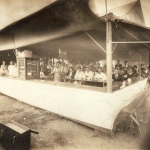 Another anonymous, undocumented image of the cookhouse. 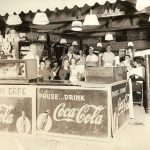 In this one, at least, I know some of the people. The guy in the center of the picture, wearing the hat: that’s Great Grandpa. 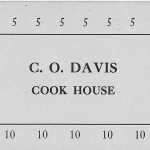 These are the receipt cards used at the cook house . Everything costs 5 or 10 cents and the cashier would punch out the correct totals.

My great grandfather was also a songwriter and singer, and worked the Vaudeville circuit as well, but more about that later.