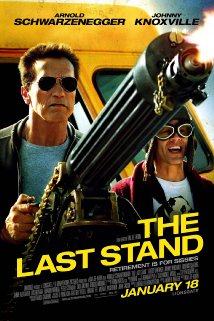 “The Last Stand” on IMDB

There’s two movies here. One is pretty damn good, the other is pretty damn stupid. They’re intertwined, of course. but it still feels wrong; like the stupid movie forced itself on the good one in an alley. It’s not a pretty metaphor, but it’s apt.

The stupid movie sees a dangerous drug lord escape from custody in Las Vegas in the most ridiculous way conceivable. First he has bends his limitless resources to steal a one-of-a-kind super-powered concept car. Then, during a super-secret transfer, an immense crane sneaks up on the convoy and uses a magnet to lift his detention van to the roof of a building. The magnet is cleverly tuned to rip the guns out of all the guards hands, but not affect his handcuffs at all.

The remainder of the plan is to drive this utterly recognizable, essentially magic car non-stop to a small town on the Mexican border where a gang of hired thugs are building a secret bridge across a canyon. Because a glider or a helicopter or even a damn zip line would be too easy.

The good movie follows a small town sheriff (Arnold Schwarzenegger [IMDB]) who, of course, was a decorated elite cop in L.A. He marshals his inexperienced deputies – newbie, hottie and comic relief – against a ruthless gang of cartel mercenaries. As is the rule, the town is filled with a collection of lovable oddballs that come to the hilarious assistance of the town’s protector.

The stupid movie drags the whole thing down in the beginning, but things pick up later. Honestly, the whole subplot with the super race-car and the FBI ineffectively chasing it when they know where it’s going should have just been dropped. If you’re entire plot can be derailed by the existence of airplanes then, just maybe, you should consider changing it.

The last act, focusing on the sheriff and his crew stepping up, leveraging their limited resources and kicking ass, is worth the price of admission. Bullets fly, bad guys die and one-liners are, um, wry? The things you knew were going to happen, happen and you’re happy they did. While Arnold is forced to deal with the magic car, it’s not allowed to ruin the ending.

This is an easy one to toss on the pile of guilty pleasure action movies. The villain is weak and the whole escape scheme moronic. On the other hand the entire last act is classic, grade-A, super-deluxe, trademark Arnold.