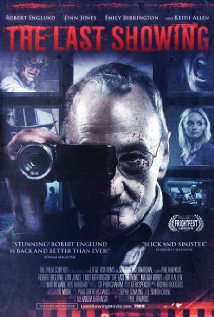 “The Last Showing” on IMDB

I’ll admit to a bit of a chip on my shoulder going into this. The casting of a now officially elderly Robert Englund [IMDB] seemed more stunt than substance (even if he does a decent British accent). How could a near-seventy year-old man possibly work as the protagonist of a slasher flick?

Although, and this is important to understand: this isn’t a slasher movie at all. This is pure psychological horror. There’s very little blood and no gore. While there’s some intimation of sexual assault, there’s nothing that doesn’t make this an excellent choice for a teenage girl’s slumber party. It’s creepy, disturbing and will tie you up in knots, but it’s also remarkably family friendly.

Englund plays Stuart, an elderly projectionist who, owing to his inability to suffer his younger management, isn’t allowed in the projection booth any longer. In deference, he’s been allowed to work the counter and ticket booths until his approaching retirement. Stuart has decided that if he’s not going to be allowed to show the movies anymore, then he just may as well make some of his own.

He “casts” a young couple for his film and traps them in the theater after hours. Englund gives the character a subtle, but effective, sense of bridled mayhem. It’s unclear from moment to moment if Stuart is actually aware of his actions, or has lost all touch with reality. The tension builds as Stuart supplants the couple’s motivations with his own. As his plan succeeds, more and more dramatically, his psychosis visibly blossoms.

As effective as the story is, it is too dependent on people doing exactly the opposite of what most people would, it seems, do. A major shift in the story is also completely dependent on one character believing something terrible implicitly about another with only the most circumstantial of evidence.

Forgiving these small intrusions of lazy writing (some clearly inflicted by the budget) we’re left with a smart, disturbing horror movie of the kind few people bother to make any longer. It’s too easy to pour buckets of blood over naked starlets and pretend that it’s scary. This movie assumes that the audience actually has brains, and that makes all the difference.