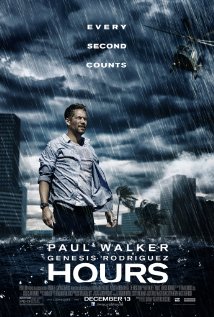 Nolan has problems. His wife has gone into premature labor. The hospital is really busy. Her blood pressure is high and she may be preeclampsic. Oh and, yeah, there’s a category five hurricane knocking on the door. Since this is 2005 and this particular hurricane is named “Katrina”… yes – Nolan has problems.

After Nolan (played by Paul Walker [IMDB]) loses his wife to childbirth in the first few minutes of the film, he’s left with a premature baby girl strapped into a ventilator and being fed through a tube. When the storm peaks and the levies break, the power goes out and the hospital is abandoned, but Nolan stays with his daughter. The ventilator’s battery is faulty: if it’s generator isn’t hand-cranked every few minutes, it will stop and the baby will die.

Dad’s not going to let that happen, now, is he?

The movie builds tension nicely, even if you do spend a healthy percentage of it yelling at dad to at least look for for other batteries (or use the several that he ignores). Forgiving that minor lapse in judgement, the rest is surprisingly solid. As Nolan faces each challenge that arises, he bonds more and more deeply with his daughter, even as he spends his fading strength more and more extravagantly.

This is basically a bottle movie. With the exception of a few mood-setting flashbacks and excursions, nearly the whole movie takes places in a single room. Much of the dialog is delivered by Walker to the intubated potato that he’s giving his all to keep alive. The move is Walker’s to make or break and he pulls it off with style.

I only learned of Walker’s death in a car accident last year as I prepared for this review. It’s a god-damned shame. If this movie was any indication, the man had a hell of a lot more to show us.