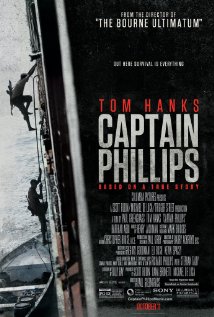 Movies are always “based” on the true story because movies never – ever – actually stick to the true story. If Hollywood saw a guy loan a stranger a dollar for the bus, they’d make a movie about a guy who kills 50 ninjas to rescue his hostage wife… who has a dollar to give that other guy for the bus. Then the bus would explode.

This is the Hollywood version of the 2009 hijacking of the US-flagged cargo ship MV Maersk Alabama by Somali pirates. Maybe the real captain Philips didn’t do everything you’ll see here. Maybe he’s not the infallible, self-sacrificing hero that the movie makes him out to be. The move is still damn good.

It stars Tom Hanks [IMDB], so we’re already ahead of the game. He’s been enjoying a serious “can do no wrong” streak for what, two decades now? Basically, if Tom Hanks is in your movie, then odds are it’s a pretty damn good movie. There’s an extended sequence at the end, after he’s rescued – yes, he gets rescued and no, that’s not a spoiler, it’s just a fact – where Phillips is being examined by Naval medics that’s simply amazing. His confusion, shock and relief are all painfully raw and palpable. The entire movie is worth it just for this scene.

Everything else is polished to a mirrored sheen. The pacing, staging, direction: everything. Rightfully, a lot as been said about the non-actors found to play the Somalis and everything you’ve heard is true. They were incredibly effective.

One thing that will stick with you is how fragile the safety of these ships actually is. This isn’t an action movie. This enormous vessel is taken by four under-equipped, nearly starved kids. The 20 men taken hostage aren’t soldiers, they’re sailors and engineers and bookkeepers. Their only defense is tricks, maneuvers and fire-hoses.

Even if the movie don’t quite tell the truth, it still offers a disturbing, well-choreographed look into a subject most people are sadly ignorant of.