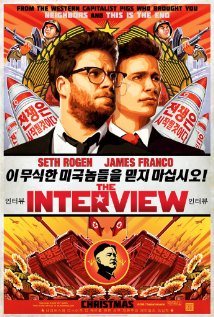 “The Interview” on IMDB

Yes, this movie caused an international cluster-fuck. Yes, it prominently features the (spoiler!) violent death of a world leader. Yes, it was the excuse that a bunch of assholes used to gut-punch an international film company and the thousands of people that work there.

There is one important question, of course: is it any good?

It’s pretty good, I guess. We laughed out loud quite a bit (even if we did feel guilty for doing it much of the time). Like any other Seth Rogan [IMDB] / James Franco [IMDB] pairing much of the humor comes from their chemistry. Much of their dialog seems ad libbed and it generally works because they play so well off of one another. Of course, the fact that they’re playing themselves – and they’re very good at it – doesn’t hurt.

The rest of the humor is problematic. Much of it is physical or situational and should be familiar, at least in tone, to fans of their other movies. There’s gross-out humor and shock gags galore. Much of it also falls resoundingly flat.

Again, minor spoilers, but I feel that an example is needed. The last act of the movie is an extended action sequence. At one point there’s a stand off between characters that ends with one of them biting the finger off of another. It’s gross and silly, but also pretty funny in that unexpected, “never saw that coming” kind of way.  Later, however, a tank is seen running over a jeep and the driver is graphically (and bloodily) depicted getting crushed by it. It’s horribly not funny and serves no purpose at all.

The same kind of dynamic exists throughout the movie. The story, of course, is that a bumbling entertainment reporter and his long-suffering producer get the opportunity to interview the president of North Korea, Kim Jung-un. They’re approached by the CIA and convinced to take part in a convoluted assassination plot targeting the “supreme leader”.

Enormous plot-holes are opened, then ignored without another word (really, how could they miss a whole tiger?). Characters are just as smart or stupid as that exact instant requires and lack all growth or depth. Maybe the U.S. should be the one blocking the release because Americans do not come off well in this.

The first act sets the stage and is, as usual for modern comedies, the funniest. The second act slides into extended doldrums as they introduce Kim himself and inject conflict into the relationship of our heroes. The last act is all the over the damn map. It squeezes in everything and anything and is, by far the least satisfying.

The much discussed death scene of President Kim really… sucked. It’s a ridiculously self-indulgent, special effects-laden spectacle that completely fails to be funny or patriotic, and if it’s neither, why bother with it at all?

The movie deserves credit for having the balls to take on real-life North Korea where a thinly veiled fictional equivalent would have worked just as well. It then squanders that credit on a decent, toss-away comedy that never rises to the challenge it set itself.