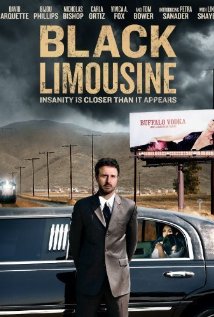 I had no idea what to expect from this. Literally none at all. David Arquette [IMDB] failed to set the world on fire, but he’s likable and fell into some really fun roles. Also, the only synopsis of the movie available was, “A ghost story set in the city of dreams.” and that intrigued me.

I suppose that’s exactly what it is too. Arquette was on top of the world. Composing wildly popular scores for wildly popular movies, married to a wonderful woman and raising a great kid. Then he pissed it all away to reach the bottom of a bottle. Then a few years went by. Then this movie started.

So, pretentious as it is, I get it: he’s the ghost and the city of dreams is Hollywood. Couldn’t be more on the nose. Now he’s trying to put his life back together. Going to meetings, spending time with his kid and working as a limo driver. He meets a strange girl and things start looking up.

Maybe? Or is everything good that seems to be happening to him all in his head? Are they simple daydreams, more complicated nightmares or just plain terrifying hallucinations? Can we really even know what’s real and what’s not?

The more important questions is: do we care? I suppose we do a little bit. Arquette is decent and the character pushes all the requisite “pity me” buttons. Cute kid that he never gets to see. Beautiful ex-wife who he might have a chance with if she wasn’t dating a douchebag. New girl maybe-girlfriend that keeps him at arm’s length. Yup, all the bases are covered here, and that’s really the problem.

This is a perfectly fine low budget. indie art house flick that does almost nothing really new or interesting. It’s got some nice frills and performances but is basically just another variation on the descent to madness. Not a bad one, mind you, and if you like that kind of thing this is worth checking out. It’s a nice – chauffeured! – ride, but you probably would have been just as happy taking the expressway.