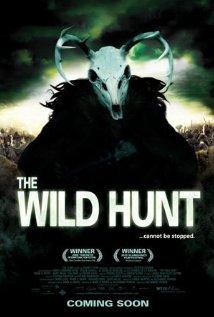 “The Wild Hunt” on IMDB

The game in the movie is a huge, annual affair hosting several hundred gamers over several days and nights. Many of them travel hundreds of miles to participate and the various factions are tight-knit and committed. Erik (Ricky Mabe [IMDB]) isn’t a fan, but his brother Bjorn (Mark Antony Krupa [IMDB]) and girlfriend Lyn (Kaniehtiio Horn [IMDB]) are in deep.

Erik and Lyn have a falling out just before she leaves, so he drives up to try and reconcile. While he has nothing but contempt for the proceedings, he’s forced to play along to see her. As reality grinds violently against the fiction of the game – a fiction that many of the players prefer – the situation careens out of control.

The filmmakers clearly have a great respect for LARPing, but many fans may find the undertones of the film disturbing. Most of the participants seem to be the kind of good-natured gamers that make the hobby so much fun. Unfortunately movies, at least the better ones, like to have something happen in them. What happens here isn’t unexpected, but also isn’t particularly kind to LARPing as a whole.

Especially considering the budget, this is a surprisingly solid movie. Technically there’s little to complain about. Much of the movie takes place at night and there are some issues with lighting due to that, but they’re not nearly as pronounced as most low-budget attempts. The acting is solid and the direction displays a notable restraint unusual at this level.

I might complain about the lack of chemistry between Erik and Lyn. With their romance driving the plot, it was a noticeable failure. It also seems petty considering how much great work is on display here. This is a solid, engaging drama that easily overcomes its few missteps and its budget. Just don’t expect it to put LARPing in the best light.