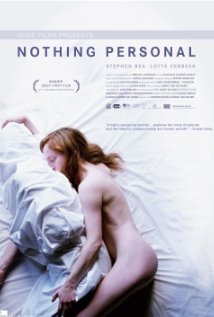 “Nothing Personal” on IMDB

This is exactly the kind of simple, quiet indie drama that causes film festival attendees to drool. Unfortunately it’s also the kind that send most other people running to see more ‘splosions and superstars. Yes, a move like this is a lot of work, but given the chance it can pay off.

The movie follows an anonymous girl (Lotte Verbeek [IMDB], who is a live action version of Disney’s Meridia from “Brave”]) as she leaves all her possessions and begins back-backing and subsistence living through Ireland. She eventually comes across Martin (veteran Stephen Rea [IMDB]), living alone in a house by the shore.

Both leads give astounding, deeply moving performances. As the two meet and come to an arrangement – she will work his garden for food – there is a palpable, but restrained desire from both for interaction. As they wordlessly grow to trust one another more there’s a nearly physical sense of barriers being slowly eroded.

Wordlessly is the key word, however. The script favors raw emotion nearly to a fault and features amazingly little dialog. Some will find this off-putting and frustrating as the stories of these characters are never really told. We see only their reactions to one another and get the barest hints about their backgrounds and motivations. The sheer number of unknowns can easily become overwhelming.

Unfortunately it also leads to the film being rather forgettable despite the excellent performances. With no solid narrative to hang your memories on the circumstances easily become muddled and confused. At times it seemed almost like an acting exercise, playing specific scenes silently to specific emotions, rather than a cohesive story.

The sparseness of the script is mirrored in the setting. Bleak, windswept shores and moors are lavished attention. Visually the film has an extremism that punctuates the nature of the characters. Vast, wide shots of field and sky make our characters small and ineffective, while lovingly crafted, lingering close-ups of the most mundane activities – fertilizing a plant or making tea – accentuate their humanity.

It’s a remarkably restrained, undeniably beautiful film. It’s also one for which the audience will ultimately remain only voyeurs. The lack of any real intimacy with the characters will likely cause some viewers to leave feeling jilted or ignored. For those that are able to accept the movie on its own terms, there’s much to recommend.