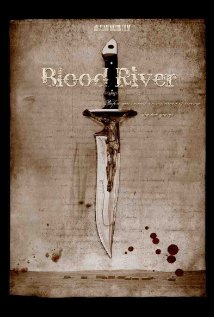 This is one of those frustrating films that gets almost everything almost right. It has an interesting premise and a decent execution, but enough flaws to drag it down.

Summer (Tess Panzer [IMDB]) is pregnant and Clark (Ian Duncan [IMDB]) is driving her through the desert to see her parents before the baby arrives. They spend a night at a dive motel, drive off, crash their car and end up walking into a ghost town. While deciding how to proceed a stranger walks into town.

The stranger, Joseph (Andrew Howard [IMDB]), is enigmatic and clearly a religious zealot. He also seems to be the only one that has any clue how to get everybody out of the situation that they’ve found themselves in. He ingratiates himself with Summer while simultaneously antagonizing Clark.

Joseph styles himself an avenging angel, or (no spoilers either way) is he actually an avenging angel? The character is confused by some odd script choices, but Howard’s performance is excellent; especially given the material he has to work with. Unfortunately Summer and Clark are both cardboard cutouts. He’s brash, loud and macho and she’s shrill, loud and weepy. Although you are clearly meant to feel empathy for one or both of them, you likely won’t be able to summon enough to matter.

It’s difficult to discuss the meat of the story without spoiling every bit of it. Suffice to say, the couple’s vacation does not end as intended. The movie smartly plays the truth close to the chest, but perhaps a little too close. The audience is given enough material to come to multiple conclusions, but not truly enough to feel comfortable with any of them.

That’s the rub: if you do this well, the audience will argue rabidly among themselves supporting their conclusion. If you don’t do it well (and it’s very difficult to do well), they’ll just be confused. A directed focus on a strong, single interpretation likely would have been much more successful.

The movie is well put-together and well worth a look for genre fans. It’s solid, full of interesting themes and one great performance. It also stuffs just a little too much into the narrative and this unfortunately drags it down squarely into “average” terror-tory (see! see what I did?!)