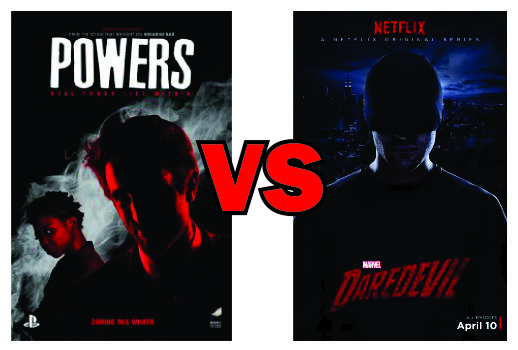 One of the benefits of the comic book media explosion – one that we need to enjoy before the inevitable implosion – is that production companies are more willing to fund experiments.  This spring two companies with non-traditional distribution methods lept into the world of comic book adaptations.

Netflix, the veteran, added to its existing stable of popular originals with its first comic book offering, “Marvel’s Daredevil”. The series, based on the vigilante of Hell’s Kitchen, enjoys a massive headstart by existing within Marvel’s extended cinematic universe. Sony, having dabbled previously with original reality programming on its PlayStation Network, released its first scripted show, “Powers”. Based on Brian Michael Bendis and Michael Avon Oeming’s acclaimed independent series of the same name.

So, what happens when two powerhouse media companies throw their weight behind some powerhouse heroes?

More on IMDB.com and Playstation.com.

Powers, its 10-episode run released on a traditional weekly schedule, is the definite underdog. Watching it currently requires a PlayStation game console and membership in the paid “PlayStation Plus” service. The show simply doesn’t have the reach that even Netflix’s relatively small subscribership enjoys. Sony is currently positioning the show as a perk for its members, but it seems likely that some other method of distribution will be leveraged eventually.

The series presents a modern world where those with superpowers, “powers”, are superstar celebrities with all of the up- and down-sides that implies. The cast is anchored by veterans Sharlto Copley [IMDB], playing former power Walker, and Eddie Izzard [IMDB], playing Wolfe, a supervillain responsible killing thousands. Neither has disappointed in anything they’ve ever chosen to do. Television veterans and quality character actors fill out the rest of the large, multi-faceted cast.

Powers tells an expansive, ambitious story that explores the dark side of celebrity, trust and loyalty. Walker, having lost his powers defeating Wolfe, is now a detective in Powers Division, the city’s special squad for handling power’s related crimes. His life becomes complicated by the addition of a new partner, the return of an old friend and enemy and the rise of a new drug on a streets targeting the growing population of powers.

The budget is the most obvious issue for the series. Many of the grand effects needed to sell the story come across as simplistic or even amateurish. Others simply look a little… “off”. All of this is superficial and easily forgiven, but it is noticeable. Everything else – all of it more important than the visual effects – is top quality.

The comic series Powers is 15 years old. It successfully created a new and interesting framework in which to discuss superhero mythos. The show just as successfully plays the same role for the movie and television generation of comic fans. 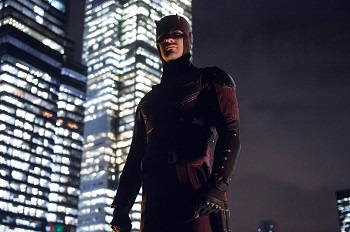 More on IMDB.com and Netflix.com.

Netflix stayed true to its trademarked brand of binge and released the entire 13 episode first season of the show at once. The show received almost immediate, unanimous acclaim. Although Netflix will not release ratings, all indications are that this has been Netflix’s biggest success story to date.

Daredevil, the vigilante alter ego of blind lawyer Mathew Murdock, exists in the same universe as the rest of Disney/ABC/Marvel’s television and movie properties. It’s been three years since the mass destruction seen in the 2012 blockbuster “The Avengers” [my review]. A corrupt land developer, Wilson Fisk, is now using any means necessary to gentrify the New York City neighborhood of Hell’s Kitchen.

This consolidation does lead to some tonal conflicts. Daredevil is set in the systemic, endemic corruption of an unforgiving and broken city. New York is dark, dirty and it’s police are in the pocket of organized crime; simply a slightly higher class of murderous thug. It’s nearly impossible to mesh this presentation with the idea that the glimmering Stark building is just a few blocks further East.

The show enjoys a quality cast headed by film and television veterans. A newly buff Charlie Cox [IMDB] leads as Matt Murdock and Elden Henson [IMDB] plays his long suffering friend and partner Foggy. Deborah Ann Woll [IMDB] is effective as the female lead and happily exists as more than simple damsel in distress. Other familiar faces fill out the rest of the cast.

As good as they are, they all pale in comparison to the exquisite, simmering violence of Vincent D’Onofrio’s [IMDB] Wilson Fisk. The character is given an amazing amount of depth and soul. He’s provided with multiple sources of power – mental, physical and financial – but cursed with an almost childlike inability to control his darker impulses. The are several wonderfully torturous scenes where Fisk does essentially nothing, but could do just about anything and leaves the audience sweating on the edge of its seat.

Daredevil is a simpler story than Powers and so better able to make better use of its limited budget. Special effects rarely move beyond the tried and true action movie catalog of blood, breakaway furniture and squibs. The show’s greatest strength in this area is the absolutely amazing fight choreography. There are extended fight scenes in this show that easily surpass the best ever seen on film.

You likely saw this coming but the short answer is: nobody! Or, if you prefer cliche: You! Both of these shows are amazing and both are must-sees for comic fans.

Powers tells an expansive, ambitious story that adds to the dialogue of the superhero genre. It makes some mistakes along the way and, perhaps, bites off a bit more than it can chew, but succeeds in every important way. Daredevil tells a simpler, less ambitious story that you’ve likely heard before. It’s also damn near perfect.

Netflix has wisely already renewed Daredevil for a second season. Sony has been mum on whether we’ll see a second season of Powers although the final episode sets a clear arc for one. Here’s hoping the favorable reviews bode well.

Both of these shows demonstrate that talented teams, unshackled by the restrictions of broadcast television, can turn modest budgets into amazing entertainment. Here’s hoping that we see much more from both… at least until – and you know this has to be coming – the bubble explodes and the whole mess comes crashing down around our ears.